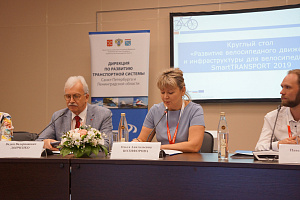 On June 21, in the framework of the International Innovative Forum of Public Transport «Smart TRANSPORT», the Directorate for Development of the St. Petersburg and the Leningrad Region Transport System held a round table on development of cycling and infrastructure for cyclists.

Event moderator, Olga Potiforova, Head of PPP and External Relations Department of the Directorate, welcomed the participants of the round table and noted that the Directorate is actively involved in international projects, including the project «Adaptation of new approaches to develop cycling and cycling routes between Russia and Finland to improve safety, mobility and environment, and to promote social development (the case: Svetogorsk – Imatra cycle track)» (project «Cycling»). The Directorate serves as the lead partner and coordinator of the project. “A lot of work is yet to be done, including organization in the framework of the project of educational seminars on road safety, since cycling safety issues are quite severe”, - said the moderator.

Vadim Donchenko, Scientific Director of the State Scientific-Research Institute of Motor Transport, spoke about the development of cycling as a key area of the Transport, Health and Environment Pan-European Programme. He noted that rather often interests of cyclists are not taken into account in the process of design of road networks and traffic management. Policies aimed at development of cycling should be complemented by taking measures to improve safety for cyclists in order to ensure reduction in corresponding accident rates.

Until 2021 the Administration of St. Petersburg plans to increase the average intensity of cycling traffic by 2 times and the length of the city cycling routes to 160 km. This was stated by Denis Minitsky, Deputy Head of the Design Department of City Parking Control Center, responsible for development of cycling infrastructure.

International expert Ruben Loendersloot, a partner at Loendersloot Groep (Netherlands), shared the Dutch way of development of bicycle infrastructure. He told the participants that cycling is a lifestyle in Netherlands. Even members of the Dutch royal family prefer this type of transport over the others. The country has established the Bicycle Embassy and actively involves all the stakeholders to achieve the best results.

Urban mobility expert Daria Tabachnikova noted that it is necessary to consider not only development of bicycle infrastructure but urban mobility as a whole, minding increasing popularity of electric bikes and electric scooters. There is a chance that in the next 10 years electric transport will completely change our understanding of urban mobility.

At the end of the event, the participants agreed to summarize the discussion and draft proposals for improvement of regulatory framework for development of bicycle infrastructure and safety of cycling for further discussions at the federal level.