Main page - Press-Center - News - 2019 - Ноябрь - Partners of the project «Cycling» held an international seminar at the House of Finland in St. Petersburg 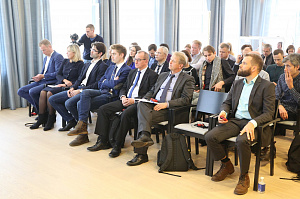 It would be wrong to start motivating residents of St. Petersburg and the Leningrad Region to transfer from cars to bicycles before a set of measures is taken to make cycling safer and more comfortable. At the seminar on the 29th of October in St. Petersburg in the framework of the project «Cycling» Russian and international experts discussed how to make bicycles an integral part of the transport system, life of the city and the region.

In his opening speech Director General of ANCO «Directorate for Development of St. Petersburg and the Leningrad Region Transport System» Kirill Polyakov spoke about the project and its significance. «The results of a survey conducted as part of the project research work showed that 55% of respondents who are not currently riding bikes are ready to start doing so when favorable condition are created, and 70% of those who are already riding bikes are ready to start doing it more often,» - he stated.

Welcoming remarks were also made by the Director of Transport of the Center for Economic Development, Transport and Environment of South-East Finland, Jyrki Karhula, who encouraged participants of the event to support cycling by showing good example to others.

Ruben Loendersloot, partner of the Dutch consultancy «Loendersloot Groep», noted that it took the Netherlands and Denmark around 30-40 years to change the way of thinking of their residents and make a bicycle an important part of their lifestyle. An integrated approach was essential to achieve that. Having examined several cycling routes between Russia and Finland, he and his colleagues developed recommendations for organization of comfortable and safe bicycle trips. He also concluded that soon, with the development of electric bicycles and other alternative modes of transport, the whole perception and meaning of mobility may change.

Jussi Kailasto, Head of Transport Systems at the Center for Economic Development, Transport and Environment of South-East Finland, and Niko Palo, Project Manager for Smart Mobility at «Ramboll Group», told participants of the seminar about best practices for creation of bicycle infrastructure in Finland. 40 million euro is allocated for development of cycling in the period 2019-2022 in Finland. The City of Helsinki set the goal of increasing the number of cyclists by 15% by 2020.

The seminar was concluded with presentation by Olga Potiforova, Head of PPP and External Relations of the Directorate, who stated that this year the forecasted number of border crossings on bikes between Finland and Russia will reach 33 000, which shows great interest of tourists from both countries in traveling between them even though active cross-border biking season is generally limited to 5 months. In collaboration with cycling communities, the lead partner of the project developed a map of prospective international, regional and local bicycle routes.

Olga Potiforova supported the words of the Dutch colleagues on need for an integrated approach that would combine infrastructural, behavioral and managerial components of development of cycling. She drew attention of the seminar participants to great importance of setting specific goals: Helsinki plans to increase the number of cyclists by next year and, as for St. Petersburg, it is more oriented towards increasing the length of cycling route network in the city.