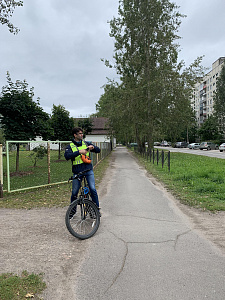 On August, 1st representatives of the lead partner of the project «Cycling», the Directorate for Development of St. Petersburg and the Leningrad Region Transport System, rode bikes along the route of the future cycle path which will pass through the city of Svetogorsk and connect it with the BCP Svetogorsk at the Russian-Finnish border.

One of the main goals of the trip was to compare proposed design solutions with actual condition of the pavement, width of sidewalks, location of greens and so on. Such a field inspection was a great way to determine need for local repair of pavement and sidewalks and adjustment of the route of the future cycle path in order to keep as many green areas as possible untouched.

It’s one of the main design tasks in the framework of the project - to create convenient and safe cycling infrastructure which will consider interests of all traffic participants, including not only cyclists but also pedestrians and drivers.

In addition to examination of the route of the cycle path, the participants of the trip crossed the Russian-Finnish border on bikes in order to identify possible difficulties and to examine existing infrastructure near the border on the Finnish side. It was revealed that the procedure of crossing the border through the BCP Svetogorsk, as well as the adjacent Finnish checkpoint, doesn't take a lot of time, however, it is rather difficult to navigate at the BCP on the Russian side due to insufficient information support.

On the basis of the field trip to Svetogorsk, on the 2nd of August the Directorate held a meeting with engineering and design organization where findings of the trip were discussed and proposed design solutions were adjusted in accordance with the actual way of things. The route of the cycle path in Svetogorsk will start at Krasnoarmejskaya street, continue along Sportivnaya and Pogranichnaya and end at Zavodskaya street right before the dam over Vuoksi river.

In February, 2017 Administration of Svetogorsk was one of the participants of the project that initiated it. Together with the City of Imatra it invited the Directorate to prepare the project application and apply for South-East Finland-Russia CBC financing. While it doesn’t contribute financially, the City of Svetogorsk keeps assisting and consulting with the project implementation throughout the process.

At the stage of application, the Mayor of Svetogorsk S. Davydov came up with the idea of coordinating activities of the project «Cycling» with another project being implemented in the area – major repair of a section of the federal road leading to the BCP Svetogorsk and proposed to include construction of the shared pedestrian and bike path in the project documentation for the repair. The Directorate communicated the idea to the Ministry of Transport of Russia and received official approval. As a result, suggested proposals were included in the project documentation for the major repair and later approved by the state expertise.

According to the project plan, pre-construction works will be finished in October, 2019 and actual construction will start in spring, 2020.