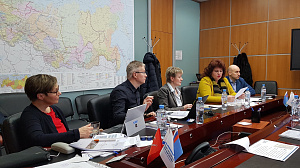 On March 15, 2019, Directorate as the lead partner hosted the first meeting of the Steering Groups of the project «Adaptation of new approaches to develop cycling and cycling routes between Russia and Finland to improve safety, mobility and environment, and to promote social development (the case: Svetogorsk – Imatra cycle track)».

Finnish partners represented by the Liaison Director of the City of Imatra Tea Laitimo and the Head of Transport Systems of the South-East Finland Regional Center for Economic Development, Transport and the Environment Jussi Kailasto, had chance to familiarize themselves with the results of the completed 1-st part of the research work “Developing an integrated approach to development of cycling in border regions ”, presented by the lead partner’s contractor completing the research work in the framework of the project – LLC «Transport Integration».

Following the presentation, partners discussed a joint work plan for the 2-nd part of the research work. South-East Finland Center for Economic Development, Transport and the Environment plans on conducting a study of condition of roads leading to BCPs on the Russian-Finnish border and evaluating them in regards with safety for cyclists. In the same time, City of Imatra will focus on services and tourism infrastructure for cyclists on cycling routes in the border areas.

In the end of the meeting, participants talked about important details of preparation of the first project update based on results of the first 5 months of the project implementation, which will be submitted to the Managing Authority of the South-East Finland-Russia CBC in the middle of April.
Back to the list