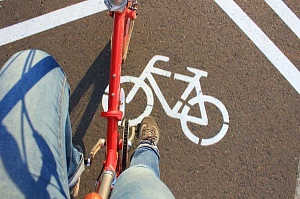 On the 12th of March partners of the project «Cycling» held the third Steering Group Meeting via conference call.

The agenda included discussion of finalization of the project interim report for the South-East Finland-Russia CBC Programme and plans for the second year of the project implementation.

The major activity that will be implemented by the Directorate during the second year is construction of cycling infrastructure in Svetogorsk and at the BCP «Svetogorsk». Finnish partners, in their turn, will continue working on their research activities under the project.

At the meeting Jussi Kailasto shared important information about big chance of allocation of financing on the Finnish side for construction of the cycle path from Imatra to the Russian-Finnish border. In case this initiative is implemented, cycling infrastructure between two border cities – Imatra and Svetogorsk - will become continuous.

Project partners are glad to announce that implementation of the project progresses according to the approved plan. Financing for the second year project activities will be transferred after the interim report has been officially approved by the Managing Authority, which is expected on one of the coming days.

Project «Cycling» is being implemented from 2018 under South-East Finland – Russia CBC Programme, which is funded by the European Union, Russian Federation and the Republic of Finland.
Back to the list